1-7-2011
7 up is a series of documents; viewing the lives of 14 children, starting at the age of 7. The producer, Michael Apted, visited these children every 7 years up until 56 which is coming out in 2012. I have chosen 3 characterS on which I will focus on these are Tony, Simon and Sue.


7 - Tony Walker was brought up in a lower class home in the east end of London, he was very active and loved climbing. when we first saw Tony at the age of 7 he wanted to be a Jockey, which he was able to pursue in later years. Tony is a rough kid who loves to muck around, Tony always spoke his mind and was easily distracted, not doing what he was told unless he had been told at least 3 times. 14 - At the age of 14 Tony was an apprentice jockey, learning the fundamentals about horses and racing he says if he didn't think he could make it 'big time' he would stop. Tony is a quite boy without as much energy as he did have when he was 7, he keeps to himself and doesn't talk much. He doesn't think much of rich people, he thinks they are people who think they can do whatever they like just because they have money.


21 - Tony had dropped out of school at the age of 15, to continue with racing, but it wasn't a great success, so he dropped out of it. Tony did get to participate in 3 races, even though he came last he said it was an amazing opportunity and he will never forget it. Tony doesn't let failure get to him he found a new goal, a taxi driver. For a hobby and a bit of money he would go to the racing and bet on horses. he was also on the 'knowedge'. being on the knowledge meant you had to learn every street in London in order to become a taxi driver, for Tony this took a few years. 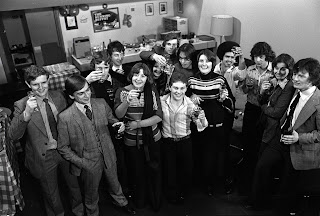 all the participants in the 7 up series, all together at the age of 21.
28 -between 21 and 28 Tony had changed a lot in his life, he started an acting class. he finished the knowledge and is now a taxi driver, he got married, and has 1 boy and 2 girls, they lived in a nice house and live comfortably. At this stage his life Tony was dedicated to his kids. Tony is just living life as it comes and refuses to waste still remain ing very positive and independent.

35 - at 35 Tony was teaching his kids to ride horses. Tony sees himself in his girls a lot, he wants to give them the opportunities that he missed out on His wife also went on the knowledge and learnt the streets in an unbelievably short time.Tony would work as a taxi driver during the day and his wife during the night. at this stage Tony is having trouble staying loyal to his wife, as he gets distracted easily. Even though Tony has had many failures he has made his acting career a success, he now does a few commercials and acts as a taxi driver in a few movies. Tony's wife admits easily to having a rocky marriage and says its never easy. Tony and his wife has the typical fights every now and then, mostly based on Tony not being strict enough and his wife spending to much money on there kids.

42 - by the age of 42 tony had committed adultery, although their marriage survived as she fought to forgive him.

Email ThisBlogThis!Share to TwitterShare to FacebookShare to Pinterest
Labels: tony at 7 years of age